The Passage Hypothesis refers to the idea that there exists a word that forces one into an alternate, if similar, dimension to their own. This proposition is widely accepted among the members of TerrorG(u/ü)m. This word is known to the group. The word consists of two common, short English words made into a one syllable portmanteau with one letter replaced by its leetspeak equivalent: █████. Any vocal utterances of '█████' is suspected to transition the speaker instantaneously. However, the similarity between the two universes means the speaker may not be aware of the shift until such time inconsistency arises. 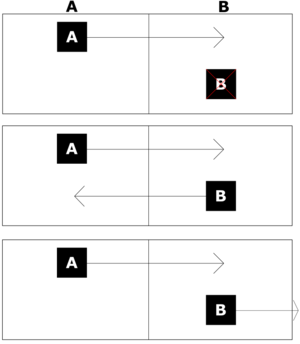 Possible effects of a passage

The mechanics of this shift are largely unknown, however. There are many possible interactions that may occur as a result, but there is so far little supporting each explanation. If Raging Thor from dimension A, henceforth known as A!RagingThor, states the word he will transition to dimension B. B!RagingThor will cease to exist within dimension B. This leaves a few unknowns:

It is also unknown if typing the word causes a shift. Members of TerrorG(u/ü)m are cautious. They refrain from typing, writing or signing the word.

The first known appearance of the word, known as the Original Sin, was written by Rapolas in 2016. The Split occurred shortly thereafter in 2017. At the time, no one suspected the word may be to blame, but it is now the leading hypothesis for the cause of The Split.

The first confirmed passage was identified during a game of Counter-Strike before 2019. Tom asked Oliver "Oli" Ide (Titman) (Oliver Ide) (Oliver Titman) something to do with cans (not Ghost), to which Oliver responded differently to how he had responded a couple of weeks before. Oliver had said the word between the two times Tom asked him the question.

Across TerrorG(u/ü)m's long history there have been many instances of a member getting information wrong or acting out of character. These are known to have been caused by utterances of '█████'. Examples include: